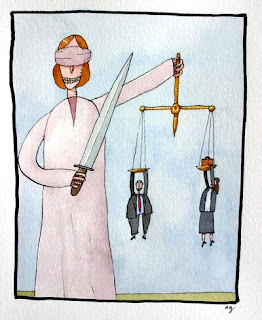 from paudie in skelper quanes blennerville;
And so we have the justice system showing that it can be blind - blind to justice that is. Anne Burke took a hammer and battered her husband, who was in bed at the time to death - hitting him 23 times. She was a battered woman, of that there is no doubt. She was a drinker of substance - no doubt about that either. He, the husband Patrick, was also a drinker and a woman beater. Again, no doubt about that there.

But a human being was killed. And not by a car accident.

Temporary insanity. Yes, I find it insane to have a hammer in the bedroom. Walked free. March 2010.

If justice was really blind, and did not know of the gender of either party in the case, what would have been the result? If Eamon Lillis was Mary Lillis and Celine Cawley John Cawley, what would the outcome have been? Indeed what arguments would the defence team have used?

This is not a mysogynist talking. What concerns me is the fact that a person can be murdered, killed, executed and that the perpetrator receive no apparent sanction for it. Unless the defendant happens to be a man.

The "Battered Wife Syndrome" is gradually being accepted in various jurisdictions. There is no such thing as "Battered Husband Syndrome". For a dissertation on this, go to this article.

This is only a blog entry, so I keep my argument short.

For some excellent reading on this read Emer O'Kelly at Independent.ie. Sheer brilliance from Brenda Power at TimesOnline. See also the Tribune.

It's a difficult one. I feel uneasy that it's part of a slippery slope to uninteded consequences.
Good piece by Emer O'Kelly.

I with you completely agree.

I with you completely agree

I see you looking at me